Shirley Boys High School maintained their dominance of the the Wednesday Surf League at New Brighton this term.
Notably, Avonside Girls High was second and Christchurch Girls High third after some strong performances in the U14 and U16 Girls divisions.
46 surfers from 10 schools competed over the 6 weeks this term. Competitors faced a large variety of waves this term with a mixed bag of large messy days and small clean days.
Josh McCaffery (Shirley) won the U18 Boys,  Dara O’Malley (Shirley) won the U16 Boys,  Campbell Heasley (STAC) won the U14 Boys, Estella Hungerford (Haeata) won the U18 Girls , Leah Wilson (Avonside) won the U16 Girls and Ava Henderson (Avonside) won the U14 Girls. 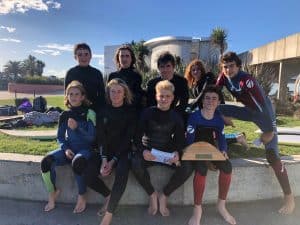 The top schools trophy was dominated by Shirley Boys High with 97 pts. Avonside Girls High was second with 40 pts and Christchurch Girls High was third with 36 pts.
The contest series runs each Wednesday in Term 1 and Term 4 at New Brighton Pier.
Individual surfers contest heats in 6 categories each week earning individual points as well as points for their respective schools.
The next event on the Canterbury Scholastic Surfing calendar will be the Canterbury Scholastic Surf Champs on the 19  May.